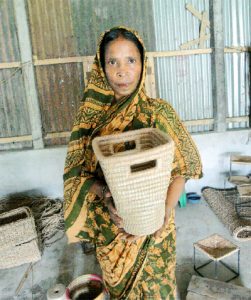 Mazeda Begum (50) is a muslim lady from the eastern piece of the Bangladesh who influences Kaisa to leaf item for JD Crafts from the earliest starting point of her life. Her significant other Md. Niaz Uddin is (55) who additionally work for his better half as a subordinate. It’s the genuine indication of collaboration. She is from Bramonbaria of Comilla. She is honored with 3 little girls as it were.

Mazeda Begum has been working with JD Crafts for a long time. At the early ages, she was to be a house spouse just, who used to simply dealing with her family as it were. Be that as it may, when being of the nature, the destitution showed her to be solid as a top priority. She approached to stepping up with regards to a view to confronting destitution. She came to think about the JD Crafts by another person from her town who recommended her to speak with them. At that point she began making the example items for JD Crafts and getting a few requests from the purchasers. Step by step, she could annihilate the destitution by dealing with sound life.

Presently two of her girls got hitched and another is contemplating in their town school in class 9. Her month to month wage is close about Tk. 4,000 (four thousand as it were). Since her significant other works with her, add up to pay of their family is about Tk. 7,000 (seven thousand as it were). Around 200 (two hundred) craftsman individuals (for the most part ladies) are working there under her immediate supervision. JD Crafts has been giving numerous openings (propelled installment, inspiration, bearing) with a view to creating them in financial period. Furthermore, Mazeda Begum alongside her relatives is adapting admirably as a maker of JD Crafts.Shipping group.

Teresa and Her Baskets 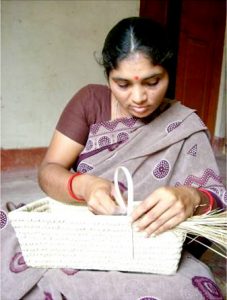 Teresa is a Christian lady from the Western piece of Bangladesh who influences Date-to leaf crates for JD Crafts. She used to be just a housewife once, yet now her solid constant container weaving hands makes her the main profitable winning individual of her family.

Teresa loved bin making from her adolescence and learnt this aptitude from her dad. Around then it was her side interest to make containers and accordingly she attempted to help her dad with her two little hands. In any case, who realized that this ability of her would one day help her to encourage her entire family. Teresa’s significant other used to do little organizations and his salary was not awful by any means. Be that as it may, following 7 years of her marriage, he exited her with two youngsters behind. Teresa came back to her dad’s home however there likewise misfortune chased her. Her dad passed on. All the duty to win the vocation of her two kids alongside her mom and one younger sibling fell on her. To start with she couldn’t choose what to do. At that point she recollected her youth side interest and began to influence date to leaf crates. She joined a JD Crafts maker aggregate there, and began to influence date to leaf bins from JD Crafts consistently.

Presently Teresa has beaten the dim night of her distress with her those two relentless hands and her containers which she makes for JD Crafts. She gains around 4,000.00 Taka (US $ 70.00) every month now. She sends her two youngsters to class, her child is in class eight and her girl is in class three. She has returned grin to her mom’s lips too. She showed her sibling this expertise and he began to make bins for JD Crafts too. Teresa and her bins go one next to the other. She influences the bins and they to make her life to push forward. 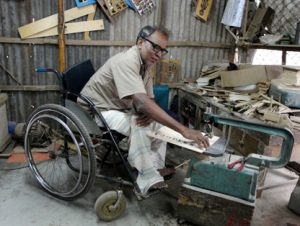 Sultan Ali was a rancher of his initial life who dealt with others feild. He was extremely persevering man. The majority of his relatives were very reliant on his pay as it were. Be that as it may, tragically, he had a mishap of his life. He wound up deadened in 1992. Everything of his life has been changed by this mishap. There was no desire for his relative. At that point he is taken to CRP (Center for the Rehabilitation of the Paralyzed) for treatment by the assistance of him precious ones. He gets treatment 3 years under CRP supervision. He gets one year preparing from that point on making distinctive sorts of riddles. He began to make these items. He has been making these things for most recent 15 years at CRP’s Wood Workshop. He procures Tk 7000 (seven thousand taka just) every month which is adequate for running his family well. He has one school going youngsters (7 years of age) named Shohag. He is well with the majority of his relatives now.